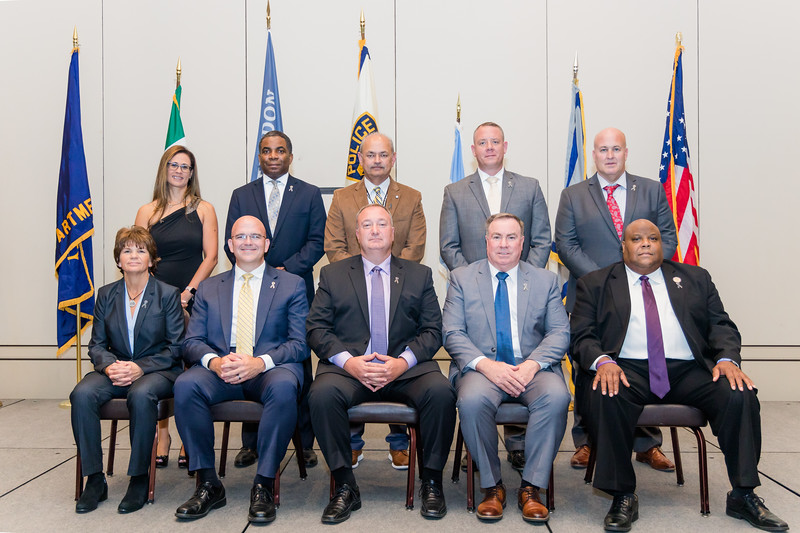 The Virginia Association of Chiefs of Police on August 23 elected the members of the 2021-2022 VACP Executive Board at the Association's 96th Annual Conference in Williamsburg, Virginia.  The board was installed during the Association's Valor Awards banquet.  The new board members are:

PRESIDENT – Chief A. J. Panebianco, Middleburg – Chief Panebianco has been the police chief in Middleburg since April 2012.  He previously served as Chief of Police in Louisa, Warsaw and Buena Vista.  Chief Panebianco has a Bachelor of Science in the Administration of Justice from Bluefield College, and is a graduate of the Professional Executive Leadership School at the University of Richmond.  He currently serves on the Awards Committee, Budget & Finance Committee member, and Professional Image & Ethics Committee of the VACP.

IMMEDIATE PAST PRESIDENT – Chief Maggie DeBoard, Herndon – Chief DeBoard has been the Herndon Chief of Police since 2012, after serving 26 years with the Fairfax County Police Department where she rose to the rank of Deputy Chief.  She has an M.A. in Security Studies (Homeland Security and Defense) from the Naval Postgraduate School, a B.S. in Criminal Justice from George Mason University, and is a graduate of the FBI National Academy and the WestPoint Leadership program.  Chief DeBoard serves as President of the Virginia Chapter of the Police Unity Tour, which was formed to raise awareness of all officers killed in the line of duty, and to raise funds for the National Law Enforcement Officers Memorial Fund (NLEOMF) in Washington, D.C. She serves as a member of the Board of Governance of the Northern Virginia Regional Intelligence Center.

1ST VICE PRESIDENT –. Chief Keith Hartman, Buena Vista  - A Brooklyn, N.Y., native who was once an ironworker on Long Island, Richard Keith Hartman was hired by the Newport News Police Department in July 1992 and spent time in patrol, investigations and training. He retired from the department after 23 years, rising to the rank of captain, to take the position as Buena Vista Police Chief in 2015.  Chief Hartman holds a master's degree in public administration from Troy University and a bachelor's degree from Saint Leo University. He has participated in training at various law enforcement schools, including the FBI National Academy in Quantico. Chief Hartman serves on the Virginia Law Enforcement Professional Accreditation Executive Board.

2ND VICE PRESIDENT – Chief Jeffrey Katz, Chesterfield County - Colonel Jeffrey S. Katz was sworn in as the Chesterfield County Police Chief in January 2018. He started his law enforcement career in 1989 as a police cadet with the Plantation, Florida, Police Department. Katz was later hired by Plantation as a community service officer. In 1994, he joined the City of Parkland, Florida, Public Safety Department as both a full-time police officer and professional firefighter.  He joined the Boynton Beach, Florida, Police Department in 1998. He was promoted to the rank of sergeant in 2001 and earned the rank of lieutenant in 2004. Katz assumed his role as chief of the Boynton Beach Police Department on an interim basis in July 2013. He was permanently appointed as the 32nd chief of the Boynton Beach Police Department in September 2013. After graduating with a bachelor's degree in criminal justice from St. Leo University, Katz earned a master's degree in business leadership from Nova Southeastern University. Chief Katz is a graduate of the Southern Police Institute's Command Officer Development Course and the FBI National Academy and has completed several executive level courses in leadership and management through Harvard University and the University of Notre Dame.

3RD VICE PRESIDENT – Chief Craig Branch, Germanna Community College - Chief Branch was appointed Germanna Community College Chief of Police in 2011. He has more than 20 years of law enforcement and security experience in Virginia and the District of Columbia.  He previously worked for the J. Sargeant Reynolds Community College Police Department where he served as an Interim Chief and Deputy Chief of Police. He also has worked for the Virginia State University Police Department and the Virginia Commonwealth University Police Department   Chief Branch has a bachelor's degree from Virginia State University.  He currently serves as a member of the Virginia Criminal Justice Services Board, and previously served on the state Advisory Committee on Juvenile Justice.  Chief Branch served as 2014-2015 president of the Virginia Association of Campus Law Enforcement Administrators. (2017-2021 term)

Chief Kamran Afzal, Hopewell (2020-2024) – Chief Kamran Afzal started with the Hopewell Police Department on January 1, 2019. Chief Afzal has over 30 years of experience in law enforcement. He started his career in September 1991 with U.S. Capitol Police. He joined the Arlington County Police Department in Arlington, Virginia in April 1993 where he spent 24 years with the last 11 ½ years as a member of their command staff team. Chief Afzal served as the Chief of Police for Durango Police Department from April 2017 to December 1, 2018. Chief Afzal earned a Bachelor of Science in Economics from George Mason University and Master of Public Administration with a concentration in Criminal Justice from Troy University in Alabama. He is a Certified Public Manager and attended the Senior Management Institute for Police, the FBI National Academy, and the Professional Executive Leadership School.

Chief Scott Booth, Danville (2020-2024) – Scott C. Booth has more than 21 years of law enforcement experience, including 19 years with the Richmond Police Department, where he rose through the ranks to major. Booth previously served as deputy federal security director for the U.S. Department of Homeland Security/Transportation Security Administration in Charlotte, North Carolina. Prior to becoming Danville Chief of Police, he served as police chief of Metropolitan Washington Airports Authority (MWAA).  He also serves on the Virginia Law Enforcement Professional Accreditation Executive Board.

Chief John Clair, Marion (2020-2024) – He began his law enforcement career in the U.S. Army, graduating from that military branch's police academy in 1999. As a military police office, he undertook traditional law enforcement work at Fort Sam Houston in Texas and then was transferred to Korea, where his work focused on black market investigations and drug suppression. He returned to Fort Myer, a U.S. Army post associated with Arlington National Cemetery, where his duties ranged from dog handler to presidential support missions. During Operation Enduring Freedom, he was sent to Guantanamo Bay. Clair was honorably discharged in 2005. He then worked as a private contractor providing protective services for the U.S. State Department and the U.S. Department of Justice.  Clair entered municipal law enforcement with the town of Dumfries' police department. He was working with the Prince William County Police Department when he was appointed Quantico police chief in 2013.

Chief Travis Christian, Petersburg (2021-2025) – Christian, a 30-year law enforcement veteran, joined the Petersburg Police Department as deputy chief, and was appointed chief in November 2020.  He previously served as police chief in Waverly and deputy chief at Virginia Union University. Chief Christian holds a B.A. in Criminal Justice from Columbia Southern University and is a graduate of the Professional Executive Leadership School and the FBI Academy.

The Virginia Association of Chiefs of Police & Foundation (www.vachiefs.org) is a statewide charitable organization of federal, state and local police chiefs and other law enforcement executives dedicated to improving the professionalism of police agencies in Virginia and to providing training and education programs for law enforcement executives. The Association was founded in 1926 and has more than 600 members.
# # #