Officer Katie Thyne, 24, joined the Newport News Police Department in 2018. She is a Navy veteran and reservist.

The Virginia Association of Chiefs of Police recommends that all Virginia law enforcement officers shroud their badges in honor of Newport News Police Officer Katherine "Katie" Thyne, 24, who died Friday, January 23 from injuries sustained the night before during a traffic stop.

We express our sincerest condolences to the Newport News Police Department and the family and friends of Officer Thyne.

The Newport News Police Foundation has set up a memorial fund for Officer Katie Thyne for those interested in making donations — https://www.nnpolicefoundation.org/officerthyne.html.  The Honor a Hero Project has created a t-shirt to benefit Officer Thyne's family. Shirts are available until February 10 on their website.

Law Enforcement Honor Guards are invited to participate in the service in Hampton. Contact the Newport News Police Public Information Office with any questions. 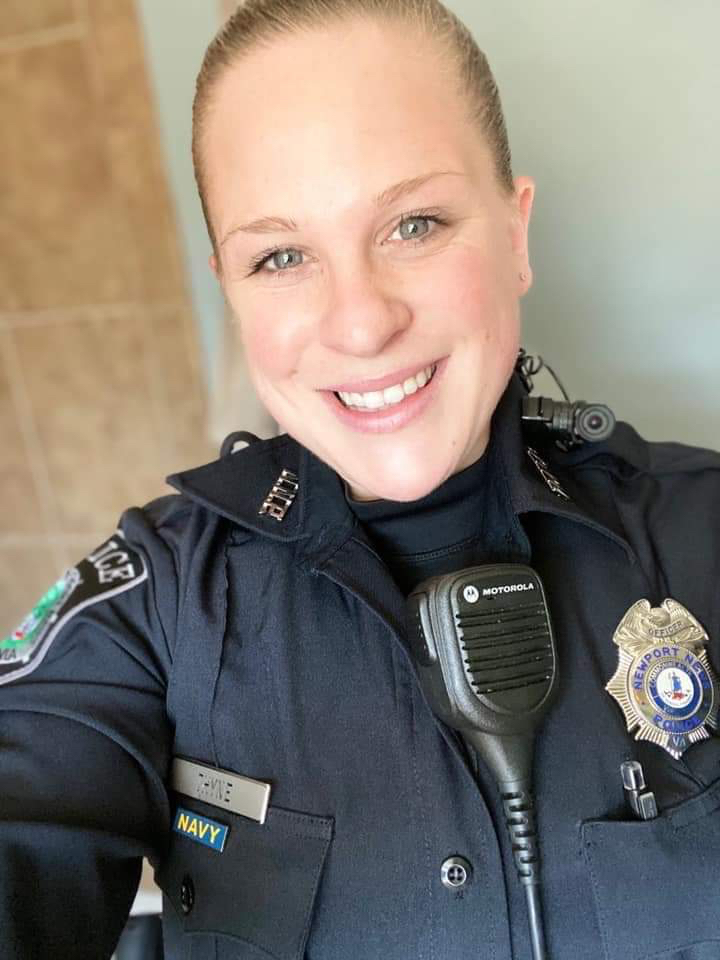 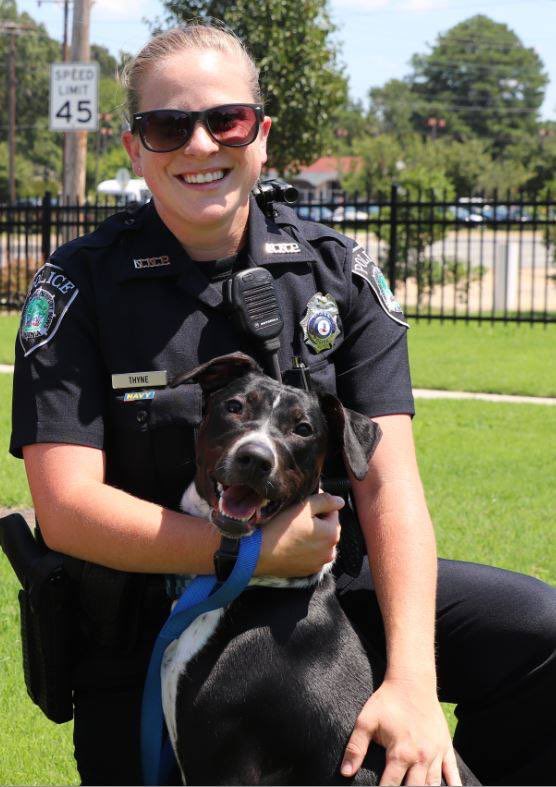 NEWPORT NEWS, Va. (WAVY) — Newport News Police are feeling a pain the hours following a tragedy in their department — a pain they haven't had to feel in 26 years.

Drew provided new information about the investigation and Thyne during a Friday morning news conference.

He said Thyne joined the Newport News Police Department in 2018 and was assigned to the South Precinct. She leaves behind her mother and stepfather, a brother, her two-year-old daughter and a loving partner.

“If you ever saw her, all she did was smile. You almost started to laugh because she was always smiling.”
POLICE CHIEF STEVE DREW

Before joining the police force, Thyne served in the Navy. She enlisted in 2013 and was currently a Reservist.

Chief Drew was emotional as he talked about moving forward from this tragedy. He thanked the department chaplains who responded to the hospital where Officer Thyne was taken Thursday night.

“There is a lot of healing that needs to take place. There is no timetable for that,” said Chief Drew.

Officer Thyne's body will be transported from the Medical Examiner's Officer in Norfolk to the Altmeyer Funeral Home in Newport News during a Saturday afternoon procession. The Police Department said the procession will begin at 1 p.m. and will pause shortly along the route at the Newport News South Precinct at 3303 Jefferson Avenue, where Officer Thyne was assigned.

According to the Newport News Police Fallen Officers page, Thursday is the first line of duty death in Newport News since Officer Larry Douglas Bland died May 13, 1994 — almost 26 years ago.

Drew provided additional details on what unfolded on 16th Street. He said there was a report of drug activity in that area, near Monitor-Merrimac Overlook Park. Two officers, including Officer Thyne, responded around 6:45 p.m.

They arrived separately. They approached a vehicle because of a strong odor of drugs and removed the passenger. Then, he said both officers went to address the driver. While the driver's side door was open, Chief Drew said the driver accelerated. Officer Thyne was unable to get out of the way and was dragged for about a block. The driver crashed into a tree at Walnut Avenue, pinning Officer Thyne. She died from her injuries at Sentara Norfolk General.

The driver ran from the scene after the crash, but was apprehended after a short foot pursuit. Chief Drew identified the driver as Vernon Green II. Currently, he is facing charges of felony homicide, felony evade and elude and possession of narcotics.

Ivy Runnels, the front seat passenger in the vehicle with Green, was arrested on a drug charge.

Chief Drew said there is body camera footage and that it is “very clear.”

The investigation is ongoing. Officers investigated in the area of Monitor-Merrimac Overlook Park on Friday morning, where Chief Drew says they collected additional evidence.

“She had her whole life ahead of her,” said Newport News resident Sue Moore. “I wish these things never had to happen.”

The tragedy began a block from Moore's home on 16th Street and finished in her front yard when Green allegedly crashed the vehicle.

“It was just the most awful sound,” Moore said. “It was so loud. I thought the car had hit my house.”

From her home, Moore watched as crews rushed to Thyne's aid.

“They were triaging the person and working on the person,” she said.

Thyne was rushed to the hospital, but doctors weren't able to save her life. Moore said she had hoped the person, Thyne, was going to be OK because she was put into an ambulance.

During the following investigation into the incident that left Thyne dead, the forensic unit was seen taking pictures in Shawna Roundtree's backyard.

“It's scary, it's really unnerving,” Roundtree said. “The stop was right across the bridge it seems like every time something happens over on that side they flee over to this side.”

“I went to talk to the officer and all he could tell me was it wasn't good,” said Rayle. “All I could do was pray, pray for the family.”

Although she watched some of the incident from her house, Moore didn't know the officer didn't survive.

“I was so upset that a 24-year-old, dedicated, devoted officer who had a 2-year-old girl … was dragged,” Moore said.

The incident serves as a sobering reminder of the dangers officers can face. Moore wishes it wasn't the case.

“Officers should never have to go through that,” Moore said.

Condolences started pouring in from local police departments and the community immediately upon news of the Newport News officer's death.

Stay with WAVY.com for updates on this developing story.